Rummaging through a file my mom handed me of school work, I came across a story I wrote and received second place on. This touching and hilarious story walks readers through the journey of an alien from Zoon and how it became a teenage boy. The MC even goes on a date! I think I was about eight or nine when I wrote this. I will type this word for word so grammar will be skewed.

Oneday on the planet Zoon I had to go down to earth. Why? Because we eat and live on something that the humans call French-Fries. Well I was flying fine then out of the earth a shot came and hit me from sky! My ship went down, down, down, and then CrAsH! When I looked I thought I knocked down the sun. I could tell because it was dark. Well I thought to myself and then opened my eyes and millions of people were outside my space ship!! I got scared then I started to cry. I saw the baby crying so since I had magic powers I changed into a human baby. Then a little lady came over to my ship opened the top and took me out. I looked at her and said “Friend-Fries”! Then with a big grin on my face I laughed a little. She took me home in a weird ship called a car. It was pink “yuk!””I hate pink!”

She thought I really was a baby. She changed my deappir [diaper], she fed me, she changed my bed, she gave me gross baths, she played with me and she made me wear PINK! Well I forgot all about my French-Fris for 18 years.

I was 18 years old and in school. I always knew what cool was. Well my first date was rad she didn’t like pink! Just in case you want to know more about the date. Take her out yourself!

One Saturday I was looking at some old junk and found my first step-up book. 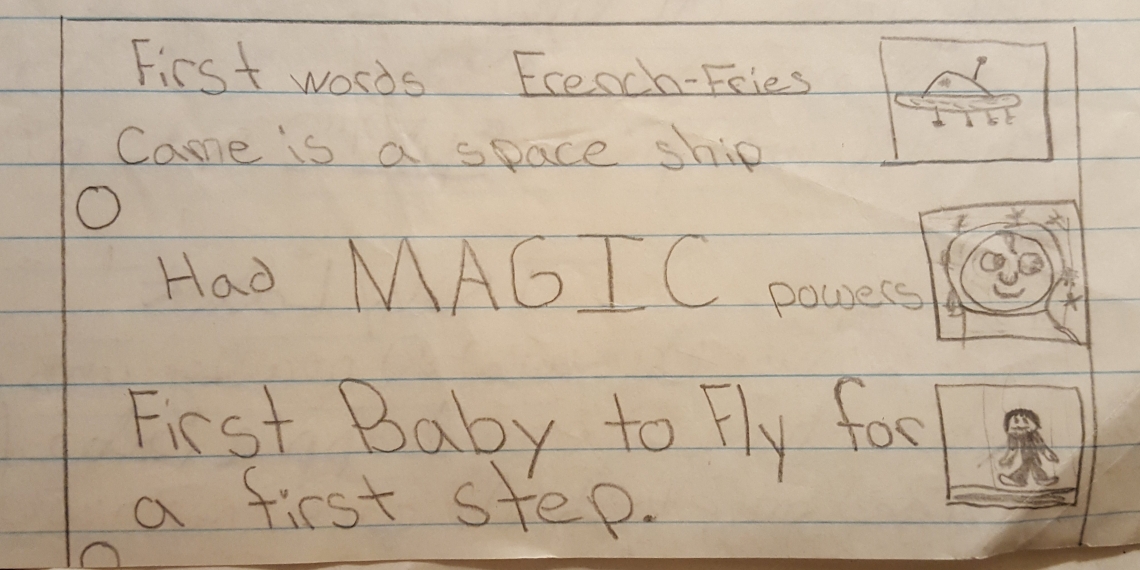 Then I thought and remembered all about my planet Zoon, and his mishion [mission] to bring back French-Fries. I had to do it then. So as soon as I got to Mc Doundles [Donalds] I had to think of a way to get home. MAGIC POWERS! I thought well if I had magic powers I could make a space ship.

The space ship was not very good. But it at least it worked. I was about to get in when my mother called me. I dropped all 19 bags of French-Fries and went home. Then when I came back I looked all over for my space ship and Frenc-Fries. But they were gone. I got mad and changed myself into a alien again. Then I made another ship and stole 109 bags of Frenc-Fries (I think it will last longer.) then I went up to my planet. (It was hard getting.) When I got there no one was there. I got out of my space ship and aliens jumped out of space trees! I dropped the French-Fries and ran into my space-ship and went home. When I got back I changed back into a 18 year old boy. And there I lived like a boy for the rest of my alien life.

I am a writer. It's funny how long it took me to admit this without feeling shame or fearful I was spinning lies. I also read, garden, and a mental health advocate. My side hustle is writing and my undercover job is as an IT Recruiter. View all posts by Melisa Peterson Lewis

A Little About Me

I like to write, therefor I do. I like to read, you get the idea? My hands get dirty in the garden, it’s my happy place. There’s constant work to do, I experiment with the give and take life provides me on a regular basis. Join me on my adventure!